On April 25, PATHWAYS marked the completion of its 2017-2018 Game Changers program in Brussels, supported by the U.S. Embassy in Belgium. During the academic year, PATHWAYS worked with 12 schools (in 6 pairs), reaching 220+ students and over a dozen teachers in the Brussels region, including students from a variety of socioeconomic backgrounds and from both Francophone and Dutch-speaking schools. In two-day experiential workshops conducted during regular school hours at their school and at their partner school, students discovered a problem-solving approach to negotiation based on the work of the Harvard Negotiation Project, made connections with students from another neighborhood and background, and practiced their spoken English in meaningful, motivating negotiation role plays, simulations and debriefs.

Four students from each participating school attended the closing event to represent their peers, collect certificates and meet students from other school pairs. A number of students, teachers and headmasters spoke to share their impressions of the program and participants were encouraged by diplomats from the U.S. Embassy in Belgium. “It sounds like we have a lot of future diplomats in the room. Projects like these go to the very heart of our mission here at the U.S. Embassy where we are constantly working on building bridges between different communities and increasing international and cross cultural dialogue.” – Deputy Public Affairs Officer Jameson DeBose at the PATHWAYS graduation ceremony, Whitlock Hall, April 25, 2018. 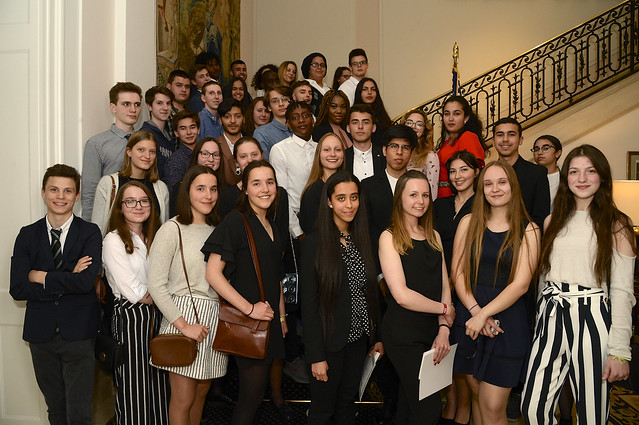 The 2017-2018 Game Changers program was supported by the U.S. Embassy in Belgium.